Suicide was the leading cause of death in Australia for youth between the age of 14-24 in 2020, and the fourth leading cause of death for youth between the age of 15-29 worldwide. Furthermore, young people and adults aged 16-34 reported the highest prevalence of suicide thoughts or behaviors in Australia. The research supports that most suicides are linked with psychological and emotional distress. The taboo nature of the topic around mental illness and suicide further creates further isolation for youth looking for the necessary solutions or an opportunity to be heard or understood. There is a combination of factors that contribute to the cause behind why a youth thinks of suicide as a solution to the overwhelming experiences they are facing, and in faith-based communities’ certain attitudes or beliefs can exacerbate the distress. The constant battle with life stressors, mental illness and lack of support networks can result in youth experiencing thoughts of suicide or act on those thoughts of suicide. A combination of the aforementioned factors and the current statistics around leading cause of death in youth indicate that Muslim youth face similar challenges in life. However due to the taboo nature of the topic it is often not discussed.

Youth suicide is a challenging topic to discuss, however avoidance does not serve the outcome of a suicide safer community. Although it is uncommon to hear about youth suicide in the Muslim community, it does not paint an accurate picture of the issue we face within the community. In addition to suicides, Muslim youth can engage in suicide behavior and survive, or can live with thoughts of suicide. Avoidance can stem from the stigmatization of the topic; however, this could also be as a result of not having the knowledge or necessary skills to do a suicide intervention. Being equipped with the appropriate skills to be confident in doing a suicide intervention within our personal lives is essential to having a suicide safer community. Suicide intervention skills are important for not only health professionals but also parents, faith leaders, community leaders, friends, family and other youth. In the process of acquiring these skills, identifying and being mindful of our attitudes is also important around suicide. Muslim youth are facing a wave of challenges in the new world and improving the language and our behaviors towards suicide can encourage youth to seek the necessary formal and informal supports. However, Muslim youth have lower access rates to mainstream services that can be extremely helpful for prevention, intervention or postvention which can act as an additional barrier for reducing rates of suicide. Fortunately, there is work that can be implemented to create suicide safer communities for our youth.

With a strong background in education and an active member of his local community, Ziyad is passionate about working with Culturally Linguistically Diverse (CALD) and faith communities. His experience includes being a high school teacher in a South-West Sydney High school, as well as co-founding Educaid Australia which focuses on delivering mental health education and suicide intervention training amongst CALD and faith communities. He is currently an accredited suicide intervention trainer and a Master Instructor in the mental health first aid course, delivering over fifty courses to school, community and workplace settings in the last few years.

Ziyad currently works as a mental health consultant with Australia’s largest youth mental health organisation across schools in Western Sydney. He works with leaders across whole school communities to improve their approach to mental health and wellbeing, as well as provide suicide postvention support using an evidence based-approach. He is currently undertaking his second postgraduate studies in Masters of Counselling at Torrens University. 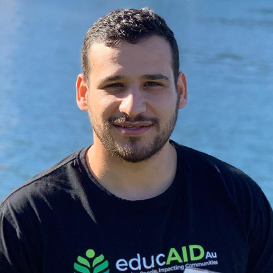 Tareq is currently completing his Master of Professional Psychology at WSU. He has a strong passion in working with adolescents and adults from diverse backgrounds and providing culturally appropriate care to assist in improving their overall well being and quality of life. Tareq has key interests in working with a range of mental health concerns including mood disorders, anxiety disorders, substance use disorders, suicidal ideation and neurodevelopmental disorders. He is currently completing his placement at Psychcentral. Also, Tareq is a co-founder of Educaid AU, a NFP that focuses on destigmatizing the topic of mental health and suicide in CALD communities. Tareq is also currently completing work coordinating suicide intervention training across Western Sydney with LivingWorks Australia.